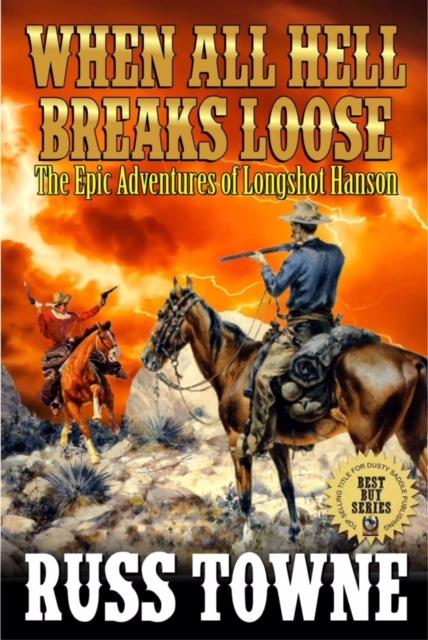 My latest western is now on sale on Amazon as an ebook! The paperback version should be available by tomorrow. I’d greatly appreciate it if you’d help spread the word!

This book features one of my favorite characters: Leith Longshot Hanson

During the Civil War young Leith Hanson quickly becomes known as the best shot in his unit. He is so accurate that he earns the nickname Longshot and is selected for a special sharpshooter unit. After the war, Longshot just wants to put the war behind him and move on with his life, but friends from those bloody days need a man with his special skills to help them overcome terrible odds. Four stories in this one book:

Too Many Notches Carved in My Soul

Longshot is called upon to help a former brother in arms is about to lose his farm and possibly his life and the lives of his family due to the greed of a powerful man with Napoleonic ambitions.

Some war wounds can’t be seen and never heal. Sometimes, even the invisible ones get infected and the poison keeps growing until their victims believe there is only one thing left to do. A friend from the war requests help from his sharpshooting friend when it seems everyone turns against him.

A letter from a woman who claims to be the wife of a man Longshot thought was killed in the war begs Leith to come save their town’s children who are all being held hostage in their school by a ruthless and man and his gang.

Newly widowed Annie Davenport fights for the life of her little boy and herself, and to save her ranch. She faces a deadly drought, an evil man who threatens to steal her ranch if she doesn’t marry him, and horse thieves that steal the herd that might have saved her family and spread. At the end of her rope, Leith Hanson has an idea that might help her to survive, but it means they’ll both have to risk it all in a longshot struggle to survive. This tale was derived and inspired by a short story found in my earlier work. Now readers can learn more about Annie Davenport and Leith Longshot Hanson in this expanded work.

My wife and I have been married since 1979. We have 3 adult children and 5 grandchildren. I manage a wealth management firm that I founded in 2003. My Beloved is a Special Education teacher for Kindergartners and First Graders. I'm a published author of approximately 60 books in a variety of genres for grownups and children. In addition to my family, friends, investing, and writing, my passions include reading, watching classic movies, experiencing waves crashing on rocky shores, hiking in ancient redwood forests, and the beauty of kindness and nature.
View all posts by russtowne →
This entry was posted in Action, Adventure, New Releases, Uncategorized, Westerns and tagged action, adventure, new release, western. Bookmark the permalink.

3 Responses to When All Hell Breaks Loose